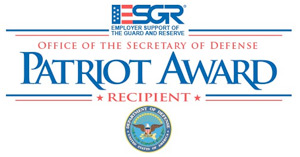 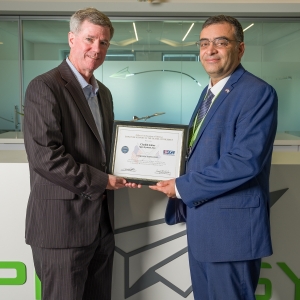 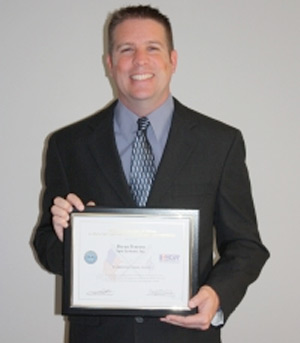 Employer Support of the Guard and Reserve (ESGR) Patriot Award

SpinSys is honored to announce the recognition of Chakib Jaber and Bryan Penrose by the Employer Support of the Guard and Reserve (ESGR) as a patriotic employer. Both were nominated by SpinSys’ own Catherine Forsyth, in gratitude for their outstanding support to her during her 2018-2019 deployment with the 35th Combat Aviation Brigade (CAB) to Southeast Asia.

The first in ESGR’s series of awards is the Patriot Award. An employee serving in the National Guard or Reserve, or the spouse of a Guard or Reserve member, may nominate individual supervisors and bosses for support provided directly to the nominating Service member and his or her family. The Patriot Award reflects the efforts made to support citizen warriors through a wide-range of measures including flexible schedules, time off prior to and after deployment, caring for families, and granting leaves of absence if needed.

Catherine decided to nominate Chakib after just one phone call. “When I told him I needed additional time getting the 35th ID (my unit that deployed before me) out the door, he said, ‘whatever you need,’” Catherine recounts. “Then when I got pulled to go with the 35th CAB he said, ‘I love my country, and I’ll support whatever you need.’”

She nominated Bryan after he was continually gracious with flexible work schedules and assignments during her support of her current unit and pre-deployment training with the 35th CAB. While remembering Bryan’s support, Catherine says, “I couldn’t have asked for a more supportive supervisor. He ensured I could take the time not only to support my unit, but prepare my family for the upcoming deployment.”

The 35th CAB’s mission was to provide aviation support to ground forces throughout the Operation Inherent Resolve (OIR) and Operation Spartan Shield (OSS) areas of operations by using several mixed-design aircrafts such as Black Hawks, Chinooks, and Apaches.

Learn more about their deployment here:

Are you a National Guard or Reserve member? Learn more about ESGR at https://www.esgr.mil/About-ESGR/Who-is-ESGR.